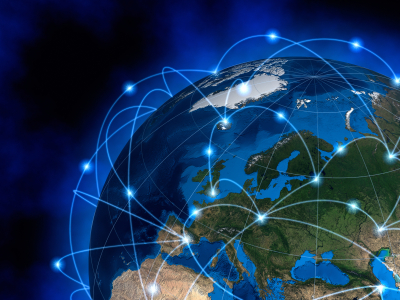 What is connectivity? We regularly talk about the importance of being connected, and with the omnipresence of social media sites such as Facebook and LinkedIn, it’s almost mandatory to have some form of visible public profile. Yet, how does that translate to the way we do business? Are we in fact, as connected as we think we are?

Shared Services Add Value in a Global Economy
Going back ten or fifteen years, the concept of organisations “sharing” or connecting some of their functionality became an accepted strategy for those large enough to support the business case.  In fact, sharing services seemed to offer the answer to those looking to do business in a cost effective way, across a shrinking world. With the emergence of a whole generation of ERPs (mostly Oracle and SAP), the time appeared to be right for a new way of doing business with a structured, but flexible connectivity.

Since those early days, many organisations have made savings of several millions of pounds by streamlining their processes and adding new levels of visibility and accountability. The difference between their previous position, and their new situation, was such that despite relatively expensive set-up costs, the predicted efficiency and cost savings were able to come to fruition.

Evolution
Ultimately, the key to the evolution of Shared Service Centres (SSCs) and their continued success will come from an expansion of the existing model, and an element of lateral thinking from those in charge. For example, if by using a shared AP function an organisation has been able to save £5m, there’s no reason why the same principles can’t be applied to Procurement, HR, legal or even some elements of marketing.

Don’t Forget the Past
However, maximising success lies in how connected the organisation is in the first place. Take the mismanagement of the Government’s foray into the use of Shared Services for example. Cast your mind back to 2004, when in response to the Gershon Review, eight shared service centres were established. The National Audit Office subsequently examined five of them, finding that operating and building costs ran £0.5bn over the allocated £1.4bn budget. On top of that, only one of the centres examined managed to break even and of the two producing reports – they generated a loss of £255m.

Plan for the Future
The problems seemed to stem from the very start of the project. The lack of connectivity between those recommending the changes, and a failure to properly communicate why they were important, led to a sluggish take up in participating customers. This meant that some of the SSCs were running at less than half capacity.

The Best is Not Always the Best For You
Exacerbating the problem was the implementation of overly complex and extremely expensive ERP systems with additional prohibitive upgrade costs. Discovering these issues after the event has been a costly and, for the most part, avoidable problem. Two of the Government’s shared service centres looked to cut their losses and implement simpler ERP systems, despite the heavy investment already made.

Evaluate Existing Processes
The issues faced by the Government highlight the need for a thorough investigation of existing systems and processes well before the implementation of anything new. It would seem an obvious place to start, but a dismissive attitude towards existing issues and procedures, combined with an overly simplistic or optimistic approach to transitioning to new technology and processes, can significantly downgrade the targeted benefits. In fact, as already demonstrated, they can actually make a cumbersome system worse, by simply overlaying bad processes with new technology – in fact actually automating the errors the systems were supposed to prevent.